When you think about surfing in Oregon the first thought that comes to mind is a rugged coastline with huge swells, cold water, and sharks. If none of those three things scare you off surfing the Oregon coast, then the heavy locals likely will. The gloomy pacific northwest weather does nothing to motivate outdoor activity either.

What if I told you that there is a place two hundred miles east from the Pacific Ocean where the sun almost always shines bright, the skies are blue, and you can surf every day of the week. Would you believe me?

Well, such a place does exist and it’s in the middle of the coolest adventure town in the pacific northwest; Bend, Oregon. Yes, you heard right. You can go surfing in Bend any day of the year.

I had heard about this man-made wave, and so I was intrigued. Seeing as though I was only a mere five hours drive north of Bend, it was only logical that I should investigate the mythical river wave I had heard so much about. Mainly, I wanted to know how it compared to surfing in the ocean. Would it be as fun? Would it be easy?

I should mention that I grew up surfing from a very young age, and it is one of my favorite hobbies, hence the intrigue. I would consider myself a very experienced surfer, however I had never ridden a river wave before. Naturally, I was excited to give it a try.

Let me tell you, river surfing was not as easy as I thought it would be. It took me awhile to really understand the dynamics of this wave, and although I eventually got the hang of it, I was nowhere near as good as the local guys who were tearing it up and making it look easy.

Since my first visit, I have been back several times because duh, it’s Bend. My wife and I adore Bend, and often visit during the summer to go hiking, fishing, camping, and of course, the river wave is a lot of fun too.

I have even visited Bend in winter to tackle the river wave which was quite interesting. You can see what that experience was like here – riding Bend’s river wave in winter.

Anyway, I would say that riding a river wave is a totally different ball game to surfing in the ocean so don’t let your inexperience with surfing in general prevent you from giving this novelty wave a crack. You won’t be disappointed.

Here’s everything you should know about riding Bend’s River Wave.

Bend has become the go-to spot for a variety of adventure seekers over the last few years and its population has increased exponentially. Snowboarders and skiers are drawn to Mt Bachelor in the winter, and mountain bikers, hikers, fishermen, and paddle boarders are in abundance come the summer months.

The van-life boom has also taken a hold on the town littering the streets with 4×4 Mercedes Sprinters and Ford Sportmobiles making us feel a little under dressed in our almost thirty-year-old Chevrolet G20.

Nevertheless, no matter your mode of transport everyone who travels to, or lives in Bend, seems to be here for one thing, to enjoy the outdoors!

Bend offers absolutely every type of outdoor activity possible, so why not add surfing to the long list of recreational opportunities here?

History Of The River Wave In Bend

The Bend Whitewater Park was conceived in 2007 through a partnership between the Bend Park and Recreation District and Bend Paddle Trail Alliance but it wasn’t until September of 2015 that the project came to fruition and officially opened to the public. It cost almost ten million dollars but was money well spent as more than 230,000 people visited the park in 2017 alone, and those figures have been rising ever since.

Surf Anywhere, a company that designs river waves, was contracted to provide the design details to create the surf wave at Bend Whitewater Park. The resulting wave is not only one of the best manufactured river waves in the world, but has also become one of Bend’s highlights and a major tourist attraction.

The waves here are created by 26 different underwater hydraulic steel plates that can be adjusted to shape the river features.

The standing surf-able wave is known as the Green Wave, a green, glassy faced wave perfect for surfing, and one of the most advanced man-made rivers for surfing in the United States.

Surfing The River Wave In Bend

Surfing Bend’s river wave is absolutely nothing like surfing a wave in the ocean and don’t believe anyone if they tell you otherwise. The closest thing I would compare it to is wake surfing.

Basically what I am saying is that you shouldn’t expect to rock up and rip the wave to shreds on your first day no matter how good of a surfer you are.

The water here flows extremely fast which makes paddling in and getting up very challenging. Once you are able to stand up, you’ll have to learn how to master surfing the wave which is also quite tricky.

In my experience, you have to do all the turning with your back foot and try not to catch a rail. It sounds easy enough, but it will likely take a few sessions to get the hang of it.

Best Conditions For The River Wave In Bend

Earlier in this article I said you can ride the river wave in Bend every day of the year. Well, that might be a little bit of stretch as there are several factors that come into play and can change how this wave breaks.

The main factor is water flow which is measured in cubic feet per second (cfs). The ideal flow for the best wave here is between 900 and 1000cfs which creates a clean carve-able face. These ideal flows usually happen in the months of April, May, August, and September.

Flows can get as low as an un-surfable 250cfs in winter. Anything above 500cfs is totally doable, but even this can still be a little sketchy. Your best bet is to ride the wave during the summer months when flows range between 800 to 1600cfs.

The river water can be quite cold, even in the summer months with water temperatures hovering around 60 Fahrenheit so a wetsuit is recommended year round, plus it provides some protection from the bottom.

I had no issues surfing in the summer wearing only boardshorts, but perhaps a two millimeter vest would make things more comfortable for surfers more sensitive to cold temperatures. Winter on the other hand is a different story when the water can range from a freezing twenty degrees Fahrenheit to a still chilly forty. These temperatures will call for a good five millimeter hooded wetsuit, gloves, and booties!

Forget about riding your regular surfboard here because this is no ocean wave. It is far too shallow and you risk damaging your board. You can definitely get away with riding a Catch Surf, Wave Bandit, or similar foam surfboard here, however if you are going to ride a surfboard like this, it is best to cut down an old set of fins to ensure they don’t break off or drag on the shallow bottom.

Ideally, you need a very short board to surf this wave, like five feet short! There are surfboards that have been specifically made for river surfing and if you don’t own one, you can rent one from Bend Surf Co., a family run business who offer the best rates in town.

This business is run out of a home garage, and I have personally rented from them several times and it has always been a smooth transaction. If you decide to start river surfing regularly, Bend Surf Co. have a range of brand new boards to purchase too.

The Vibe On The River

Unlike most line-ups along the west coast that are usually orchestrated by the local surfers, Bend’s river wave has more of an inclusive, skatepark vibe. Everyone, including locals, patiently wait their turn. Whilst waiting, surf stories are traded and advice is given out to anyone struggling or needing pointers.

There is an all-round good vibes, positive atmosphere here, and even if you don’t have the courage or the gear to surf Bend’s River Wave, you can always be a spectator.

I highly recommend floating the Deschutes River while you’re in Bend which is a very popular activity on any given summer day. Join the crowd of locals and visitors for what I like to call the ‘floating party’ for a certified fun time. There are several spots to access the river, picnic, and enjoy the sunshine.

Where Is The River Wave In Bend?

You can surf the River Wave on the Deschutes River at Bend Whitewater Park which is located smack bang in the middle of downtown Bend. 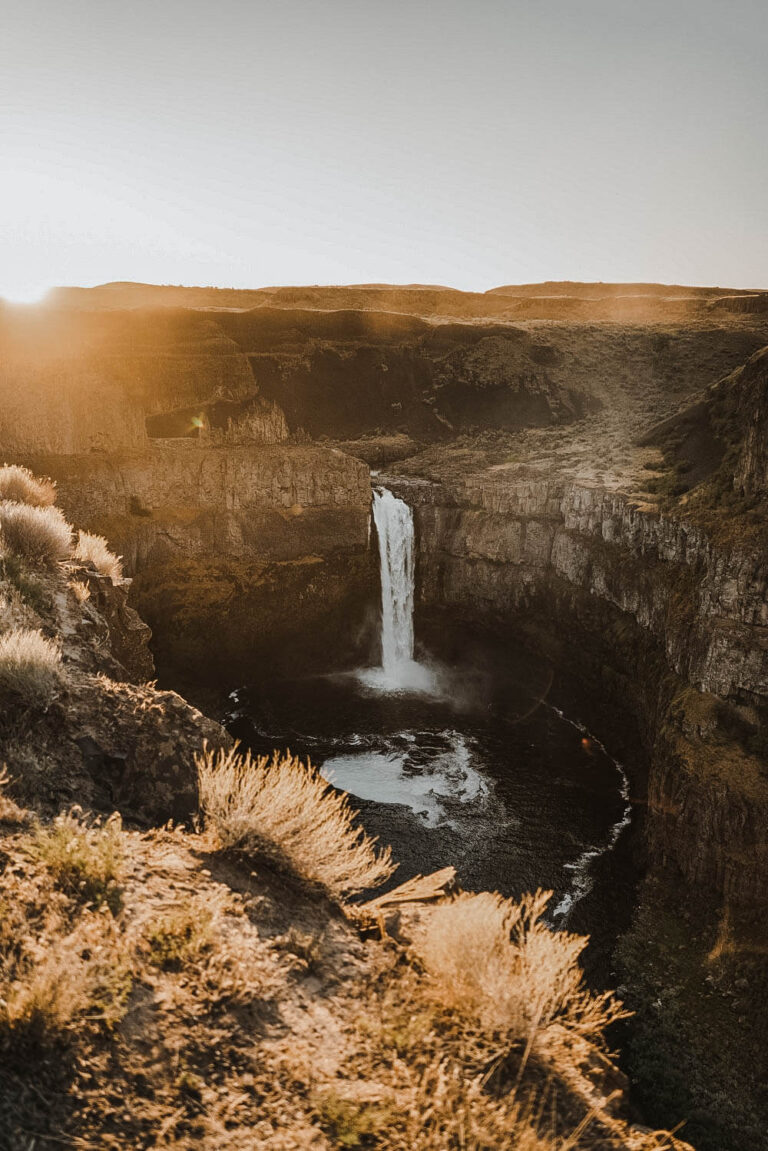