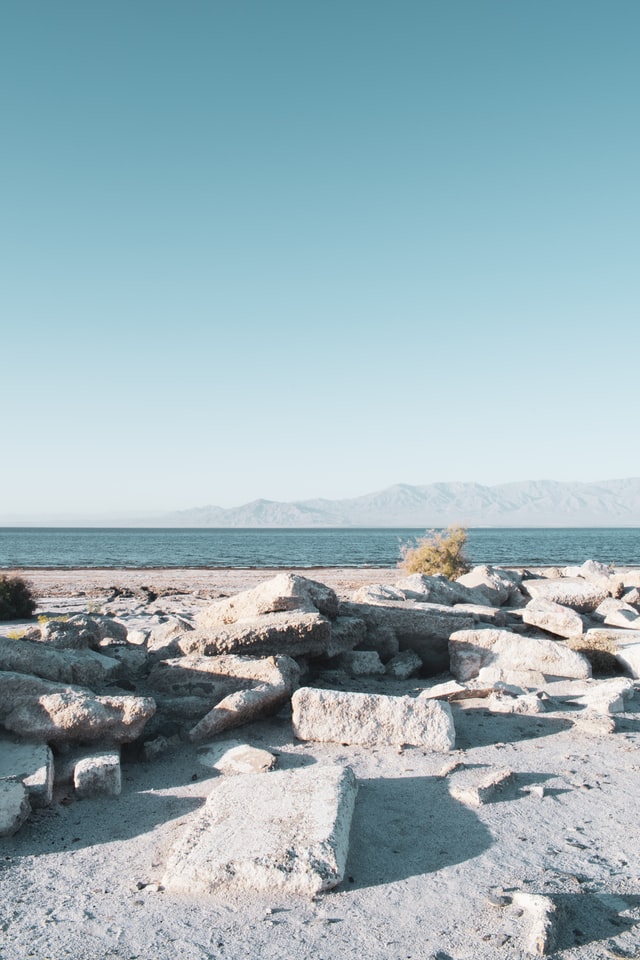 The Salton Sea is a large, shallow, saline lake located in California’s Sonoran Desert. It is one of the world’s largest inland seas and also one of the lowest places on earth at 227 feet below sea level. The sea is only five feet higher than Death Valley’s lowest point at Badwater Basin. This is also where the San Andreas Fault line begins before advancing 800 miles to San Francisco.

Believe it or not, the Salton Sea was once a vacation destination for the rich and famous but when rising salinity levels combined with toxic agricultural runoff started killing fish, the area started producing a foul smell and the place quickly turned into a ghost town. The Salton Sea which was dubbed the ‘Riviera of the America’s’ became something more like a dystopian world out of a Mad Max film. Desolate and dead.

Although the area is rundown, the Salton Sea is still a man-made wonder as the largest lake in California and one of the largest inland seas in the world. There is something quite calming about being in such a quiet and barren environment.

Besides the sea’s stunning azure beauty in front of the looming Santa Rosa mountains and beautiful bird life that abounds here, the surrounding towns have quite a thriving and unique arts community.

How The Salton Sea Formed

The Salton Sea formed between 1905 and 1907 when the Colorado River burst through poorly built irrigation channels south of Yuma in Arizona. The river filled the Salton Basin, a remnant of prehistoric Lake Cahuilla, inundating communities and farms in the area and was only stopped when a line of protective levees was built out of boulders to block the breach zone. By then the lake was 40 miles long and 20 miles wide covering 400 square miles.

Over the years the salinity, fertilizer, and pesticides from agricultural runoff rose so high that it killed most of the lake’s species of fish except for Tilapia. Tilapia are a species of fish originating from Africa that can withstand high salinity levels although it is predicted that even they will completely die off. They were introduced into the canal system to control algae growth.

The Salton Sea’s Beaches Are A Boneyard

One of the most unusual things about the Salton Sea are the piles of fish skeletons that can be found along its shores. Thousands of Tilapia die every year when winds stir up low oxygen water from the lake’s depths. It is for this reason that the beaches surrounding the sea are a boneyard littered with dead Tilapia.

The Salton Sea Is Disappearing

The Salton Sea has been shrinking for years and slowly killing the fish and birds that live here. California’s largest lake which has been sustained by the Colorado River for decades is now increasingly being diverted from farms in the area to the ever growing desert cities of San Diego and the Coachella Valley.

As the sea’s shoreline retreats, thousands of tons of toxic dust are exposed from the dry lake bed. These exposed lake beds threaten the low-income communities that live here because high winds blow the toxic dust into the already dirty air. Even though government officials have been promising locals to revitalize the area for many years, they are yet to keep their promise.

The best place to appreciate the Salton Sea is at the Salton Sea State Recreation Area. It is operated by the California State Park Service and offers picnic areas and a Visitor Center where you can learn more about the unusual and unique history of the area.

Things To Do Near Salton Sea

The Salton Sea State Recreation Area can be found on the northeastern shore and is a popular location for camping, boating, and fishing. There is a day use fee of $7 per person and the park is open from sunrise to sunset. Camping is $20 per site and you can find more information on camping or make a reservation on the Salton Sea State Park website.

Dos Palmas Preserve is an oasis in the desert with hundreds of fan palms and pools fed by artesian springs. These lush wetlands provide shelter for a variety of threatened and endangered species including the Pupfish, a species that originates from the Pleistocene era. Find out how to get there.

Bombay Beach was once a vacation destination for the rich in the 1940’s and 1950’s but is now nothing but a mostly abandoned town that sits in ruins. Some residents have chosen to stay and according to the Census Bureau from 2010 there are still approximately 295 residents living here. The once happening resort town now attracts tourists who enjoy visiting ghost towns and abandoned locations. Be sure to check out the abandoned drive-in theater and the shipwrecked boats along the shore.

The Sonny Bono Salton Sea National Wildlife Refuge is a sanctuary and breeding ground for birds and other wildlife. The refuge is located within the Pacific Flyway which is an important migration route for migratory birds. This habitat is critical to these migrating birds as a resting place and wintering area.

There are two short walking trails that will introduce you to the wetlands in this area and where you can observe wildlife. The Michael Hardenberger Trail is a 1/2 mile trail that will lead you to a freshwater pond which is a known nesting spot for the Yuma Clapper Rail bird. The second trail, the Rock Hill Trail is a two mile round trip tail that winds through different habitats which begins at the Visitor Center.

Be sure to stop by the Visitor Center at the junction of Sinclair and Gentry Roads. Inside you will find information on desert and wetland ecosystems along with trail guides.

The Boiling Mud Pots is an area that contains a geothermal field where you can watch mud boiling and popping. Microorganisms that incredibly survive in the boiling mud combined with an acidic environment is what breaks down the rock into the muddy ponds you see before you. Please be careful when you are out there, the ground is very soft and you could fall through.

To reach the mud pots you must drive down a very rough dirt road which you can find on the corner of Davis Road and Schrimpf Road. You will eventually reach an intersection where you can see mud shaped mountains in the distance. This is the direction you want to go.

How To Get To The Salton Sea

The Salton Sea is approximately two hours from Los Angeles and three hours from San Diego. The best place to view the sea is from it’s eastern shores at the Salton Sea State Recreation Area along Grapefruit Drive. You can also take in views of the Salton Sea from Bombay Beach or from the Sonny Bono Salton Sea National Wildlife Refuge.